Shutter Speed is one of the three pillars of the exposure triangle in photography, the other two being ISO and Aperture.
Shutter speed allows you to control the amount of light reaching your cameras sensor. Adjustments to shutter speed allow you to achieve motion blur, or freezing the action of a fast moving subject.

Lets have a look at the mechanics of the shutter in your camera and how to use the settings : –

What is the shutter?

What is Shutter Speed?

Shutter speed, sometimes referred to as “exposure time”, indicates the length of time the camera shutter is open, exposing the camera sensor to light from the aperture. With a shutter speed set to a fast setting, you can freeze action completely of a fast moving subject. Slowing the shutter speed down will create an effect called “motion blur”. Moving subjects appear blurred in the direction of the motion.

You can use slow shutter speeds to photograph lightning, wildlife, or other objects at night or in dim light conditions, usually with a tripod. This effect is used by landscape photographers to create a sense of motion on rivers and waterfalls, while keeping everything else in focus.

Units of Measurement for Shutter Speed

The Effects of Different Shutter Speeds

Shutter speeds can be set to get a variety of effects in your shot. Say for instance you want to freeze the action of a moving subject. It is not always necessary to use the fastest shutter setting on your camera. You only need to use a setting that is fast enough to freeze the action.

You can also achieve certain effects by moving the camera at the same time. Take for example a motorcycle race. If you want to freeze the subject, but blur the background, use a fast shutter speed, but pan the camera with the movement of the subject as you take the shot. This will produce an image with the subject crisply in focus and the background blurred. Your shot will have the feeling of speed.

In the same situation (still with a fast shutter speed), you can hold the camera still and snap a shot as the motorcycle comes past. In this shot, the motorcycle will appear blurred, but the background will be in sharp focus. 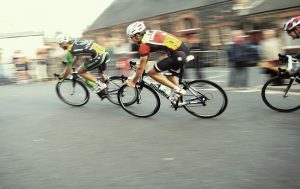 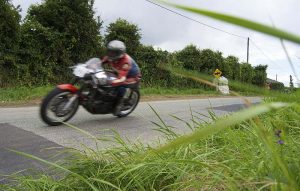 Examples of panning (bicycles) and not panning (motorcycle) with fast shutter speed.

A few additional things need to be taken into consideration when using slow shutter speeds. The slower the shutter speed, the more steady the camera needs to be. This will prevent the image being blurred as a result of camera shake. On the slower speeds, it is more than likely that you will need at least a camera support, such as a bean bag, or, at most, a sturdy stable tripod.

Some lenses, such as the  Nikon 55-300mm f/4.5-5.6G ED VR AF-S DX Nikkor Zoom Lens, have special mechanics built into the lens to reduce handheld camera shake. With Nikon cameras, the technology is referred to as VR – Vibration Reduction, the Canon equivalent is IS – Image Stabilisation.
These technologies, useful as they are, have their limits, and can only stabilise camera shake to a certain point. Beyond that point, only a good tripod will do.

Speeds typically above 1 second will definitely require a tripod. Using these exceptionally long shutter speeds allow you to create stunning effects, such as photographing star trails or the shots you see of city highways at night with vehicle lights shown as streams of light on the highway (see photo below).

Use slow shutter speeds to capture waterfalls and get the effect of the water flowing like a soft velvet curtain flowing over the rocks. In contrast to this, the stark detail of each drop would be produced with a fast shutter speed. 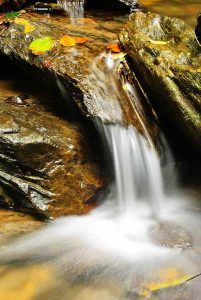 Once you’re comfortable with shutter speeds, you can even try some advanced techniques such as painting with light to get some awesome special effects.

Do you want to try out the effects of different shutter speeds without having to worry about other settings at the same time? Try using the “Shutter Priority” mode on your camera.

This mode on your camera allows you to manually control the shutter speed, while the camera will take care of aperture and other settings, so you don’t have to worry about them. To get the true effect, though, you would want to switch to full manual mode  as soon as possible. This will let you control all aspects that affect the exposure of your shot.

Adjusting the shutter speed is one of the easiest ways of getting you toes wet in going completely manual. You can produce some great shots with fairly little effort. So what are you waiting for? Get out there and get some quality cameratime!